Who would ever thought that I would join a writing class?

And yet I did. This morning. At The Jakarta Post.

So happened that I’m one of the three lucky people who got to attend the creative writing workshops available as a part of The Jakarta Post Writing Center’s Writer’s Series 2017.

So there I was, spending the first half of my weekend with fellow Jakarta Book Clubers in a super-cold hall of The Kasablanka, taking in as much insight as we could from from both local and international speakers, among them Melani Budianta, Robin Hemley, Debra Yatim, Aan Mansyur, Lawrence Ypil, Danny Yatim, and Endy Bayuni, Editor-In-Chief of The Jakarta Post. From various discussions that I followed, ranging from journalistic to poetry, I was struck by the humbleness of the speakers, how they encourage everyone not to be afraid to start writing, even if only as a way to understand one self. I also particularly enjoyed the reading sessions, which was called In The Works, where Authors/poets got up the stage and read some of their pieces. 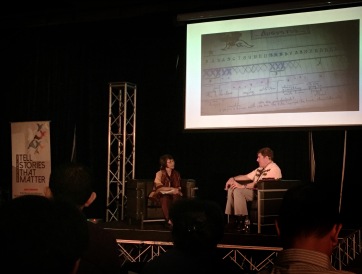 The next day, I went to The Jakarta Post headquarter for the 3 hours workshop I signed up for: WRITING FROM YOUR LIFE, which focused on how to make a great story out of your experiences and observations of your surrounding. The lecturer, Dai Fan, a leading lecturer of Creative Writing in English and the Dean of School of Foreign Languages at Sun Yat-Sen University, opened with a brief story about herself. She was originally writing in her mother language, Chinese, during her two-years in the US, but started to write in English when she got back to China, for she wanted to share about the true China to the world. 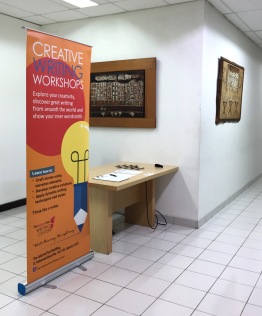 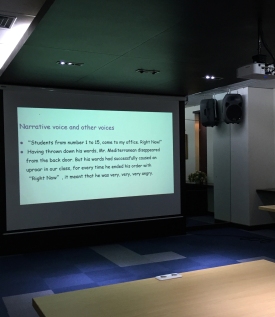 And she also said writing could really improve our reading experience. “You don’t get to be a good reader until the writing is going”.

Of course, creative writing is about telling a story, and whether we’re writing fiction or non-fiction, we need to develop a good writing techniques. By technique she meant how to make people interested in our story, how to control the flow that people would want to know more, for story telling is also the art of giving and withholding information.

Then she taught us about characterizations and voices and the importance of the opening lines in a story while going through the works of some of her students and also from the excerpts of her own pieces. Finally she guided us through some exercises. First we were told to write something in the first person point of view, and after 15 minutes of writing some of us got to read their story aloud and got some feed backs. Then we were given 3 minutes to rewrite that same piece but in third person view, and discussed it afterwards. Some felt easier to write in the first person point of view, I personally found it difficult to switch the point of view at the beginning but then the words flow more easily when using third person point of view. Probably because I didn’t feel comfortable writing about myself, and putting it into the third person point of view did put some distance between my self and the voice in the story. The last leg of the exercise was to work out more detail from a part of our previous story that we thought need some refinements. And that concluded the workshop.

Overall it was a very encouraging experience – at least for me, who signed up with a kind of ‘Jump First!’ manner – although three hours might be too short of a workshop. Hat off to TJP Writing Center for the enthusiasm in educating and sharing the love for words, and big thanks to Jakarta Book Club for this opportunity!